Philosophy, the goal of true community among men who are themselves, has been wrought by lonely, distant individuals. In an extravagance of agonies and certainties, they sent us word but did not bid us follow. The experience they show us was singular and unrepeatable. They were sacrificial victims, so to speak, whose visions–translated into thought–convey to us what a less hazardous fate could not have brought to light. In our philosophizing we revere what they proved humanly possible. We want to catch their every word; they have made it impossible for us to take any knowable order for the only true one.

But we ourselves philosophize in communication, not in isolation. Our point of departure is man’s relation to man, the individual’s way of dealing with the individual. In our world, linked fellowship seems like the true reality. Communication leads to our brightest moments and lends weight to our life. My philosophizing owes its every content to people who have come close to me. I consider it true in so far as it aids communication. Man cannot place himself above man; he can approach only those he meets on the same level. He cannot teach them what to do, but together they can find out what they want and what they are. There [alone] can be [the] solidarity in what must animate our existence if it is to turn into being. 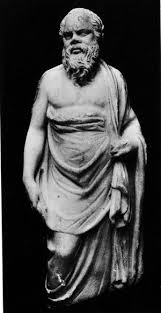 At the same time he held out the cup to Socrates. He took it, and very gently… without trembling or changing colour or expression, but looking up at the man with wide open eyes, as was his custom, said: “What do you say about pouring a libation to some deity from this cup? May I, or not?”

“Socrates,” said he, “we prepare only as much as we think is enough.”

“I understand,” said Socrates; “but I may and must pray to the gods that my departure hence be a fortunate one; so I offer this prayer, and may it be granted.” With these words he raised the cup to his lips and very cheerfully and quietly drained it.

Up to that time most of us had been able to restrain our tears fairly well, but when we watched him drinking and saw that he had drunk the poison, we could do so no longer, but in spite of myself my tears rolled down in floods, so that I wrapped my face in my cloak and wept for myself; for it was not for him that I wept, but for my own misfortune in being deprived of such a friend.

Greatness is a transitory experience. It is never consistent. It depends in part upon the myth-making imagination of humankind. The person who experiences greatness must have a feeling for the myth he is in. He must reflect what is projected upon him. And he must have a strong sense of the sardonic. This is what uncouples him from belief in his own pretensions. The sardonic is all that permits him to move within himself. Without this quality, even occasional greatness will destroy a man.