I discovered the following stories in a Spanish text from 1837 by Friar Agustín Saturnino y Gonzaga (OSA). It had been scanned into Google Books as a part of its archive project.

I do not know if the tales are canonical, but they intrigued me enough to want to translate them from Spanish as well as update Chinese spellings to conform with our contemporary grasp of how Chinese should be Romanized.

These then are folktales about the experiences of a Chinese philosopher in mid-life who was called Lí-Dan. In later years this philosopher would be called only “Venerable Master,” or Laozi. These are stories of crisis, the growing spirit of dissatisfaction throughout an ancient land, and the realization of how much the Great had come to prey upon the Little.

These are the tales of mid-life. They come before Laozi ultimately decided to leave his service in the Imperial Archives of Zhōu. They are before he went into the West to teach the Indians, the Persians, and the Greeks. They are before he wrote down the 5000 characters expressing his worldview which would become the most translated book by a single author in the history of the world: the Daodejing.

I have not put them in any particular order. I give them to you as I translate them. 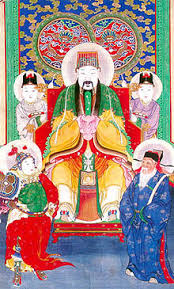 In the age of the Warring States, there was a new dispensation of peace in the land of Zhōu. Ji-Xiàng, Lord of All Yíng & King of Shēngyù, had ascended to the Phoenix Throne as the Jade Emperor. In order to ensure lasting peace under Heaven, the Lord Xiàng reformed many aspects of the Imperial bureaucracy, seeking the path of least resistance for order to obtain throughout his vast lands for the benefit, the edification, and the love of his people.

Among the many changes was a search amidst the great families for a new Viceroy to act as the Emperor Under Heaven’s own Great Hand as well as for new Governors of Righteousness to guide each of the four provinces–East, North, West & South.

Now the Lord Xiàng with the transcendent vision of his Heavenly Perch did let his eyes & favor fall upon Lord Xióng of Shēngwù, Margrave of Yìshù and a Knight of Kēxué. Verily was the Margrave brought unto the Tower of Hǎicháo, elevated to Archduke of Xuézhě, and therein did he accept the vocation to be Chief Minister, Great Hand & Viceroy of Zhōu…

…Throughout all of these great events, the lives of the people went on as they always did. Did not the lesser nobility & the workers have a responsibility to trudge onward despite who occupied the Phoenix throne? Surely throughout the years of war, since the Great Calamity, they had seen the coming & going of many questionable leaders. Their day-to-day survival distracted and tempered their voices.

But verily, even the least of them, even that little clerk Lí-Dan, a petit scribe in the Viscounty of Lǐniàn, did turn his wide eyes and his open mind upon the goings on throughout the Land of Zhōu.

When Lí-Dan considered all that he had seen in service to his masters over the two decades since his squireship, he only could wonder if the “new dispensation” would truly bring harmony back to his homeland. Every disturbance and slight disagreement seemed to foster a tempest of emotions that kept Zhōu constantly at odds with the Beautiful Order of Heaven…

…Thinking on the actions of the Jade Emperor, the little clerk remembered with fondness his early days, when he had met his great teacher and taken up a life of service in this back corner of this tiny Viscounty…

In the age before the Great Calamity and the Warring States, Lí-Dan had served as a squire to the former Viscount of Lǐniàn, the Lord Māotóuyīng, Baronet of Wēishìjì & a High Knight of Rénwén.

The humble scribe had come to the feet of the venerable baronet and pleaded to serve him.

“O, most venerable father, I came to Zhōu from my humble home in the precinct of Yěniú-gōu. Surely I was drawn by the wonderful things I had heard about those who keep the Chronicles of the Imperial Archive. Yet this morning, as I was making my way to the archives, I happened upon you teaching students beneath the Yingke Pine.”

The old master had not even acknowledged young Li-Dan, but the hopeful youth could not stop his tongue.

“O master, forgive me for my eavesdropping. I listened at a distance as you elucidated the Classics, and could not but wonder at your erudition. Forgive my boldness, but may I request to be in your service, my lord?”

At last the old master turned his venerable face upon the youth.

“And what need does an old barn owl such as myself need of a squire? Do I venture forth from beneath Yingke Pine for the glory of Lǐniàn? Do I go about on missions beyond the borders of Zhou in the name of our benevolent emperor? Do I even hunt after wild boar in the forests of the barbarians to need someone to hold my bow & arrows?”

“Oh wise master, should you not need my back to bear up your belonings, my words to be your companion in your voyages, nor even my hands to help you on the hunt, surely I might transcribe your lessons for the good of posterity. I am skilled as a scribe and only recently completed formal studies that placed me on a path to the Imperial Archives.”

“Hoohoohoo… do you believe that I have something to be recorded, something as important as the acts of our imperial nobles & magistrates who keep the order under Heaven?”

“Venerable father, surely a wise reading of the Classics, wherein lies the remainder of an ancient & profound philosophy, is important to chronicle, yes? If I may be presumptious, such doctrines are almost as crucial as the exploits of that Emperor Under Heaven & the just rulings of his magistrates which keep us in the Righteousness of the Beautiful Order.”

“What is your name, little clerk?”

“I am Lí-Dan of Yěniú-gōu, your most humble servant my Lord… if you will take me into your household that is.”

“Have you seen much of the world, made grand mistakes and learned even greater lessons?”

“I am happy to say that I have journeyed beyond the borders of Zhou, though only for a short time to visit the archives of Fēngfù. And, because I cannot hold anything from you most venerable sir, I have indeed made grand mistakes and learned from them some great lessons.”

“So you are both curious and teachable. These are twin qualities I have seen on the wane in Lǐniàn lo these last decades.”

“I cannot speak for others–or should not at least–but I can say for myself I am willing to learn and most curious.”

“Oh you are indeed most curious;  yes, yes… Very well. Let us take on one last squire beneath the Yingke Pine. Help me stand, novice!”

Lí-Dan assisted his new master in rising to his feet. A small paper fluttered to the grass next to the Knight’s staff. The small parchment contained a poem.

Throughout the Land of Zhou
All run here, there, back again.
Doing for doing’s sake.
Yet… do not just do!
Stand now/here
In this All-Embracing-Way
And Let-Go.

“Venerable sir, you have dropped a most beautiful verse.”

The old man looked down at the poem in the new squire’s hand.

“Ah. That is no longer mine. It is yours, good novice. Let it be as a guide when you chronicle my so-called “wisdom” while sitting beneath the Yingke Pine.”

“It is written with a most skillful script from a strong hand.”

“Just right, hoohoo, just so! It was penned by my master, the Lord Bìyù of Fù-Pénzi Mountain.”

With that, the old master walked away, calling back at the novice.

“Be beneath my tree as the sun rises on the morrow.”

…So in the days before the Great Calamity, Lí-Dan did take up a most serendipitous path, for surely he had never dreamed on becoming the squire to so well respected a knight. Yet he could not see from the moment of first speaking with Lord Māotóuyīng, the Baronet of Wēishìjì, that there was any other course for his life.

Verily, verily the journey of a 1000 miles does begin with such a small, though momentous, step.