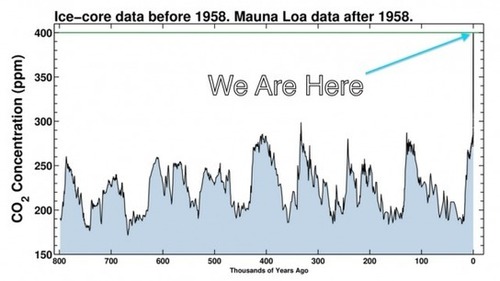 The amount of carbon dioxide in the Earth’s atmosphere has exceeded 402 parts per million (ppm) during the past two days of observations, which is higher than at any time in at least the past 800,000 years, according to readings from monitoring equipment on a mountaintop in Hawaii. Carbon dioxide, or CO2, is the most important long-lived greenhouse gas responsible for manmade global warming, and it is building up in the atmosphere due to the burning of fossil fuels such as coal, oil and natural gas.

Once emitted, a single molecule of carbon dioxide can remain aloft for hundreds of years, which means that the effects of today’s industrial activities will be felt for the next several centuries, if not thousands of years. Carbon dioxide and other greenhouse gases, such as methane, warm the planet by absorbing and redirecting outgoing solar radiation that would otherwise escape back into space.

Although crossing above 400 ppm is largely a symbolic milestone, scientific research indicates that the higher that carbon dioxide concentrations get, the more global temperatures will increase, resulting in a wide range of damaging effects. These impacts will range from global sea level rise to a heightened risk of heat waves, severe droughts and floods, according to a recently released comprehensive assessment of climate science produced by the U.N. Intergovernmental Panel on Climate Change (IPCC).

Modern carbon dioxide monitoring began in 1958 on the peak of Hawaii’s Mauna Loa volcano, which is more than two miles high. At that time, carbon dioxide concentrations were at just 313 ppm. They have risen rapidly and steadily since then, both at Mauna Loa and at other observatories around the world. The chart documenting this rise is perhaps the most iconic in all of climate science, known as the “Keeling Curve” for Charles David Keeling, the Scripps Institution of Oceanography scientist who began and maintained the monitoring program.

According to the Keeling Curve website, carbon dioxide concentrations spiked to 402.20 parts per million on April 7, whereas data from the National Oceanic and Atmospheric Administration (NOAA) showed a slightly lower level of 402.11 parts per million on the same day. Both data sets indicate that daily carbon dioxide measurements have been at or above 400 ppm since March 29, and the graph appears on course to stay above 400 ppm throughout the rest of the month and into the next.