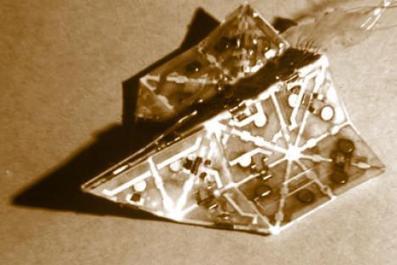 Self-folding sheets of a plastic-like material point the way to robots that can assume any conceivable 3-D structure.

Programmable matter is a material whose properties can be programmed to achieve specific shapes or stiffnesses upon command. This concept requires constituent elements to interact and rearrange intelligently in order to meet the goal. This research considers achieving programmable sheets that can form themselves in different shapes autonomously by folding. Past approaches to creating transforming machines have been limited by the small feature sizes, the large number of components, and the associated complexity of communication among the units. We seek to mitigate these difficulties through the unique concept of self-folding origami with universal crease patterns.

This approach exploits a single sheet composed of interconnected triangular sections. The sheet is able to fold into a set of predetermined shapes using embedded actuation. To implement this self-folding origami concept, we have developed a scalable end-to-end planning and fabrication process. Given a set of desired objects, the system computes an optimized design for a single sheet and multiple controllers to achieve each of the desired objects. The material, called programmable matter by folding, is an example of a system capable of achieving multiple shapes for multiple functions.

As director of the Distributed Robotics Laboratory at the Computer Science and Artificial Intelligence Laboratory (CSAIL), Professor Daniela Rus researches systems of robots that can work together to tackle complicated tasks. One of the big research areas in distributed robotics is what’s called “programmable matter,” the idea that small, uniform robots could snap together like intelligent Legos to create larger, more versatile robots.

The U.S. Defense Department’s Defense Advanced Research Projects Agency (DARPA) has a Programmable Matter project that funds a good deal of research in the field and specifies “particles … which can reversibly assemble into complex 3D objects.” But that approach turns out to have drawbacks, Rus says. “Most people are looking at separate modules, and they’re really worried about how these separate modules aggregate themselves and find other modules to connect with to create the shape that they’re supposed to create,” Rus says. But, she adds, “actively gathering modules to build up a shape bottom-up, from scratch, is just really hard given the current state of the art in our hardware.”

So Rus has been investigating alternative approaches, which don’t require separate modules to locate and connect to each other before beginning to assemble more complex shapes. Fortunately, also at CSAIL is Erik Demaine, who joined the MIT faculty at age 20 in 2001, becoming the youngest professor in MIT history. One of Demaine’s research areas is the mathematics of origami, and he and Rus hatched the idea of a flat sheet of material with tiny robotic muscles, or actuators, which could fold itself into useful objects. In principle, flat sheets with flat actuators should be much easier to fabricate than three-dimensional robots with enough intelligence that they can locate and attach to each other.

So they designed yet another set of algorithms that, given sequences of folds for several different shapes, would determine the minimum number of actuators necessary to produce all of them. Then they set about building a robot that could actually assume multiple origami shapes. Their prototype, made from glass-fiber and hydrocarbon materials, with an elastic plastic at the creases, is divided into 16 squares about a centimeter across, each of which is further divided into two triangles. The actuators consist of a shape-memory alloy — a metal that changes shape when electricity is applied to it. Each triangle also has a magnet in it, so that it can attach to its neighbors once the right folds have been performed.

Transformers–more than meets the eye!