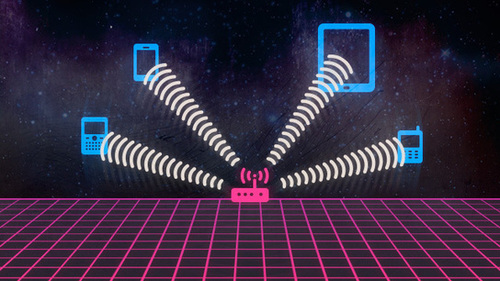 Wireless networks are getting a big upgrade for the smartphone generation.

Beamforming was part of 802.11n, the previous Wi-Fi version, but 11ac defines it in more detail, making interoperability between access points and end-user devices more likely. Separately, beamforming plays an important role in “WiGig,” which is based on the 802.11ad specification and can send up to 7Gbps transmissions over very short distances.

“Traditionally, access points have been equipped with omnidirectional antennas, which are so named because they send energy in all directions,” wrote Wi-Fi expert Matthew Gast in the book, 802.11ac: A Survival Guide. (Gast also oversees development of the software that powers Aerohive Networks’ equipment.) “An alternative method of transmission is to focus energy toward a receiver, a process called beamforming. Provided the access point (AP) has sufficient information to send the radio energy preferentially in one direction, it is possible to reach farther.”

“Prior to the introduction of multi-user beamforming, all 802.11 devices could send a transmission to only one device at a time,” wrote Gast, who also led development of 802.11-2012.

“Don’t get me wrong, 433Mbps is nice,” Gast told Ars in a phone interview. “But there’s an unused capacity because the AP is capable of transmitting three 433Mbps streams, but my phone can only receive one. You lose two-thirds of the capacity when this happens.”

MU-MIMO should bring big improvements to public Wi-Fi networks that serve hundreds of people at a time, though. And in a few years, home networks could be serving surprisingly large numbers of devices.

“We can support up to 512 clients” with top-end gear designed for heavily used networks, Todd Antes, VP of product management for Qualcomm Atheros, told Ars. “If everybody’s device was MU-MIMO-capable, our scheduling algorithm would serve them three at a time. It would go through that client population, in theory, 2.5 to 3 times faster in the same network capacity as would today’s AP.”

Even devices that aren’t MU-MIMO-capable could benefit, since MU-MIMO should free up more time and bandwidth for networks to serve older gadgets. Qualcomm announced its 802.11ac chips with MU-MIMO in early April. Quantenna, another chipmaker, announced silicon with MU-MIMO technology nearly a year ago, and Asus said in January that it would use Quantenna’s chips to offer a 1.7Gbps, four-stream home router. The Asus router isn’t for sale yet, but it’s expected to come out in the middle of this year.