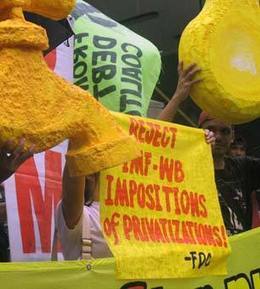 A new report from the nonprofit research group In the Public Interest shows that outsourcing public services hurts middle and working class communities as well as workers.

Habibi noted that there was a growing body of evidence that outsourcing leads to a downward spiral as that ladder of opportunity disappears. Reduced wages and benefits not only make it harder for working people to enter the middle class, they also hurt local economies as those workers have less to spend, reducing the stability of working and middle class communities.

As the report notes, government is becoming a major source of low-wage jobs. Rather than helping to raise living standards for all, privatization and subcontracting is becoming a force in growing inequality. By 2013, according to a study by Demos, the number of contracted employees working on behalf of the federal government who earned less than $12/hour had already reached 2 million–more than the number of low-paid workers at Walmart and McDonald’s combined.