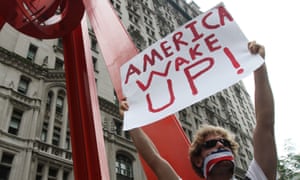 Sitting around with the first occupiers of Zuccotti Park on the first anniversary of Occupy, I listened to one lovely young man talking about the rage that his peers, particularly his gender, often have. But, he added, fury is not a tactic or a strategy, though it might sometimes provide the necessary energy for getting things done.

There are so many ways to imagine this mindset – or maybe its many mindsets with many origins – in which so many are mired. Perhaps one version devolves from academic debate, which at its best is a constructive, collaborative building of an argument through testing and challenge, but at its worst represents the habitual tearing down of everything, and encourages a subculture of sourness that couldn’t be less productive.

Can you imagine how far the civil rights movement would have gotten, had it been run entirely by complainers for whom nothing was ever good enough? To hell with integrating the Montgomery public transit system when the problem was so much larger!

Picture Gandhi’s salt marchers bitching all the way to the sea, or the Zapatistas, if subcomandante Marcos was merely the master kvetcher of the Lacandon jungle, or an Aung San Suu Kyi who conducted herself like a caustic American pundit. Why did the Egyptian revolutionary who told me about being tortured repeatedly seem so much less bitter than many of those I run into here who have never suffered such harm?

There is idealism somewhere under this pile of bile, the pernicious idealism that wants the world to be perfect and is disgruntled that it isn’t – and that it never will be. That’s why the perfect is the enemy of the good. Because, really, people, part of how we are going to thrive in this imperfect moment is through élan, esprit de corps, fierce hope and generous hearts.

Source: A letter to my dismal allies on the US left | Rebecca Solnit | Opinion | The Guardian