The Moon was one of humankind’s first measures for time. Thus, to this day the word “month” recalls that original measurement. “Moon” itself probably arises from a variation of the Indo-European term “me-” which is also the root for “to measure” and “to mean,” thus related to “mind,” as the primary function of thinking is finding the mean or the measure (reason:ratio).

A method is a meta-hodos: a way beyond or over. I have collected here some beautiful examples of the Sino-Japanese practice & method of building moon bridges inspired by this first photo which was taken in China recently during celebrations of the Lunar New Year.

This kind of wonderful bridges are typical of Chinese and Japanese garden. They are called Moon Bridges and are built in stone or wood. As part of formal garden design the bridge will be placed where its reflection is seen when the water is still. The half circle is intended to reflect in the calm water below the bridge, creating a full circle between bridge and reflection, a reference to the shape of the full moon. This picture clearly do justice to this concept.

via SeaWayBLOG: The moon bridge in the fog. 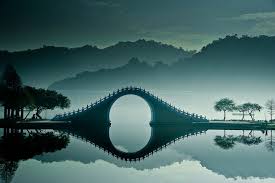 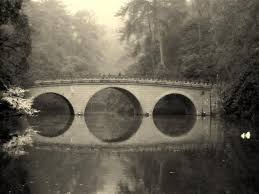